Anyone who keeps animals knows the importance of having a good vet. The characteristics required in a good vet, is one that has a wealth of knowledge about animals, a good kind nature with animals, passion for the job, determination and commitment to the cause. We have always known that Philip McManus has been a great vet as we have been using him for years now, and we only use the best for our performance ponies. His knowledge of the equine veterinary industry is second to none; this along with his passion for the job and kind demeanor with animals has helped him build a reputation as one of the best vets in the country.

His determination and commitment were never in doubt as he had never given a reason to question them, but today, Monday 14th September, he proved just how committed he is to his job and showed determination that you wouldn’t see on a daily basis.

We called Philip and arranged a veterinary test for 6am this morning as we had arranged for a load of ponies to be shipped to Dorset in the UK on an evening ferry from Rosslare. Philip made his way from Galway to Renvyle and soon after turning into the Inagh Valley, he encountered massive flooding from the torrential rain that we have been experiencing all weekend. He proceeded with acute caution and just about managed to make it thru the 9 mile valley which is well known for its floods. However it was when he came to the East Gate of Kylemore Abbey, that he knew he would not be able to make any further. The water level of the Kylemore Lake had risen overnight, as it is fed by several rivers running down from the surrounding hills, the deluge of rain meant that the lake was now completely covering the N59 to the point that Philip could drive no further. For most people this would be an acceptable time to call it quits and make alternative arrangements to vet the ponies at another time. But Philip’s determination and commitment to his job meant that he was not going to give up just yet. He parked up his car off the road, brought his gear, and started off on the 1¾ mile walk from the East Gate to the West Gate, along which he had to wade thru nearly waist deep floods in parts. I was stopped by the floods just after the West Gate and despite driving a van with high clearance; the waters were too high to proceed any further. Philip soon arrived wading thru what was now the Dawros River up on the N59, with his veterinary gear up aloft and a miners light on his head to help him see in the dark of the early morning.

I felt the need to extend my thanks and appreciation to Philip for all the effort he puts into his job, both today and every other day that he is required. Philip McManus, what a service, what a vet!

The videos are of Philip wading thru the water on the way to vet the horses, and then driving out thru the floods on the way home.

The light in the distance of the picture is Philip wading thru the water. 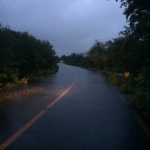